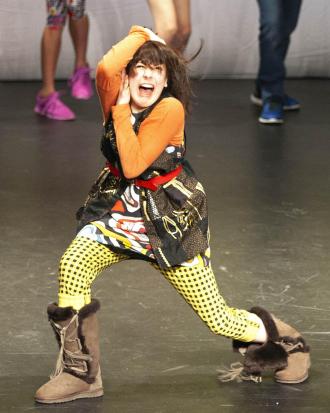 BUY TICKETS
A total disaster from start to finish. A must see!!' Iron Knob Gazette

From the cutting edge interpretive dance company who are setting rural Australia alight with their extraordinary abilities, comes their latest offering “…Tomorrow, the World!”.  This dynamic ensemble of young artistes, hailing from the sleepy South Australian town of Mintongla – home of the Big Ashtray – will set Adelaide on fire as they explore some of lifes big questions…and some small and irritating ones!  From the #metoo movement to veganism, there is no mountain too deep, no valley too high for them.

Side note: Sooo politically incorrect that Mintongla yewth’s mascot is an ashtray.

The most politically incorrect show about political correctness by youth eva.

“Tomorrow – the world” by MPAMG

SAYarts is returning to Adelaide’s favourite theatre, The Bakehouse, for a 4-day season of complete political incorrectness to help you shake off your post-Fringe blues. Middle Part Alternate Movement Group (MPAMG), led by youth theatre legend Sean Riley are poking fun at popular culture, their peers, and their elders. Come and be “edumacated” by MPAMG as they interrogate their world through liturgical dance, aphorisms, soundscapes, slam poetry, tweets, and lyrics from the Lemonade queen herself - Beyonce. No topic is taboo, no story too offensive, no icon untouchable (sorry Bert and Patti) no joke too soon after an event (yes, we go there) for this “woke” group - Inheritors of the #metoo movement, the vegan uprising, and 140 character wisdom. Be astounded by the things people say, such as “I just found out I was born on the same day as my birthday”. You will either leave the theatre affronted or in tears of laughter - there is no “middle part”. Sixty minutes of side-grabbing theatre.

Devised by this group comprised of emerging Adelaide actors (look out for some of them in the SBS series The Hunting) “Tomorrow, the world” will leave you understanding how Trump/Palmer/Barnaby Joyce could be voted in. They have their finger on the pulse … if they can find it. Directed by Sean Riley, and designed by Kim Liotta, MPAMG will give you hope for the future of comedy and also make you hang your head in disbelief at how we could have got this far without imploding. So bring your French Au Pair, grab a drink at the bar, and settle in for a night of inappropriate commentary.