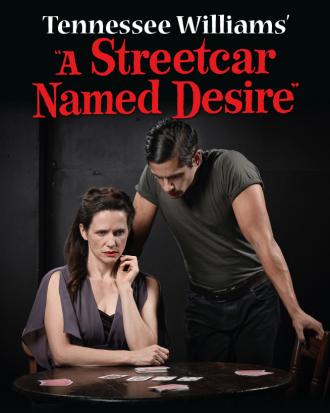 Blanche & Stanley - photo by Michael Errey
BUY TICKETS
THE LAST RIDE AT THE BAKEHOUSE - "A Streetcar Named Desire" – DON’T MISS THE BUS! ..................Proof of vaccination required for entry. This is a MASKED event. Latecomers not admitted
Presented by:
Bakehouse Theatre Company

The well known classic – A Streetcar Named Desire by Tennessee Williams should need no introduction.

However, just in case you have been living on a different planet since the first stage play in 1947 at the Ethel Barrymore Theatre in New York, (where it closed in 1949 after 855 performances) and the many incarnations that followed, here is basically what it is about------life, death, reality, fantasy, domestic violence, the plight of women, and how our society deals (or doesn’t deal) with these issues.

The plot itself is extremely simple. Blanche DuBois, a former Southern Belle, leaves her privileged background to move into a shabby apartment in New Orleans rented by her younger sister and brother-in-law.
It is not this simple plot, but the excursion into the characters, society and the times in which they lived that makes us squirm. Maybe this is why the play has had such a long life. It is always relevant.

As Otis Reading said in his last recording before his plane crashed - “Look like nothin’s gonna change, everything still remains the same”

What the reviewers have had to say about past versions of this play:-

......a brilliant, implacable play about the disintegration of a woman, or, if you like, of a society..... . It seems so simple on the surface, but it lives in your brain long afterwards, becoming more and more complex as time goes on.”
Rotten Tomatoes – by Dr. Matt Neal – 26th October 2021

“And the famous kindness for which Blanche is so pathetically grateful: that is merely the world’s shrugging indifference or cruelty that Blanche, self-deluding to the last, tries to transmute into compassion.”
The Guardian (UK) review by Peter Bradshaw 7th February 2020.

"Blanche is superbly portrayed by Melanie Munt.......Paul Westbrook plays a convincing Stanley..... Justina Ward shows how Stella's apparent vulnerability is tempered by an instinctive understanding.... Clement's Mitch is perhaps the most sympathetic character of all,"
Julia Wakefield - Weekend Notes
"...the layers of social commentary are many and disturbingly current....As Stan, Paul Westbrook delivers a Brando-esque, physical turn ....Clement deals well with the subtler character of Mitch.., Justina Ward is suitably restrained in the role of Stella...Melanie Munt’s Blanche brings deftness to the role...the gentle jazz of Walter Barbieri on piano adds the ambience of New Orleans"
David Washington - Indaily
Director Michael Baldwin creates stunning compositions with his actors across the full stage (and up the auditorium steps and into the theatre’s foyer), steering his engaged and talented cast through Williams’ grimy dilemmas with deliberate ambiguity: he doesn’t try to signal a correct answer, instead shows us the agony of alternatives – and it works well. It doesn’t need nudging for us to draw pa
Mark Wickett - Stage Whispers