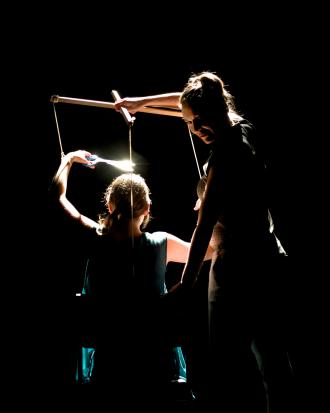 What the reviewers have said:

The Audition unfolds in an intense psychological drama – thriller is not too strong a word
Everything about The Audition is designed to challenge. As directors go, Stella takes the cake. If some directors are controlling, she’s a psychopath. The wide-eyed Lauren is putty in her hands, subjected to shocking extremes under the guise of needing to do anything, but anything, to get the part. And the extremes are shocking: you have been warned
Mansfield’s steadily-crumbling Lauren, makes for satisfying, if discomfiting, theatre.
The biggest challenge is to sustain the intensity across the two acts. Director Joh Hartog and actors Krystal Brock (Stella) and Clare Mansfield (Lauren) succeed in this, with the longer first act building to almost unbearable pitch, only to be sustained and developed further after interval. (Tip for the wise, get a drink!) ..................Peter Burdon The Advertiser

James Johnson’s play The Audition asks the question “Just how far would an actor go to get the part?” But there is so much more to this very interesting, unsettling, hypnotic psychological drama. The Audition is a powerful examination of manipulation, mind games and psychological warfare. ... It is a well honed, believable performance by Brock.  Joh Hartog manages to squeeze every drop of tension out of the text with his fine direction, and knows just how to use silence and pauses to great effect. The Audition is yet another high quality production from The Bakehouse Theatre Company............ Brian Godfrey  Glam Adelaide

A gripping experience with a number of interesting ideas thrown around inside its tight two-act 90-minute run time
The two performers bring impressive energy and commitment to their roles (acknowledgment due also to Zoë Dibb's brief-but-crucial contribution), and Joh Hartog directs at a generally breathless pace.
“The Audition” presents a psychological (and physical) battle of wills that leaves its audience wondering whether a professional performer can ever have control of their own destiny, or whether they must always submit to being ‘puppeteered’…The Bakehouse Theatre Company have brought another provocative and intriguing piece of electric theatre to Adelaide..............Anthony Vawser  ATG

This production is worth a look to see two talented actresses pushing themselves and exploring their own capabilities. Brock and Mansfield are very capable actors and they are very good in their roles; they capture the mood swings of the play and the shifting power and control during the improvisational games................Greg Elliott  Indaily

Director John Hartog has picked a couple of very capable actors. Clare Mansfield reaches into the realms of desperate overplay as the aspiring actress Lauren, giving her all the cornball histrionics which would ensure that she will never get the role. From the silliest formal self-written audition piece right through to the writhing cot case, she delivers it as breathtakingly stereotyped. It is exhausting simply watching her. Hartog's design is rather effective, Lighting and sound are apt and effective and, indeed, all round it is a highly proficient production....................Samela Harris Barefoot Review

Catch a glimpse of what goes on behind the scenes in this “roller coaster ride, laced with dark humour”.

It’s a boot camp audition where anything can, and does, happen.  A no-holds-barrred struggle between two women - a director and a wannabe actor.

The Director Stella pushes budding actor Lauren far beyond the edge in a one –to-one  audition process that lasts the entire day.  She stretches Lauren’s mental, physical, emotional and ethical views to the limits.

Will Lauren accept being a “puppet” in order to get her 15 minutes of fame?  Or will she fight back?  Maybe there is nothing to fight. Maybe Stella is simply “an unorthodox director looking for an extraordinary actress”
Either way, the tension and the balance of power between these two will keep you guessing until the very end.

“A play by James Johnson, pulling out all the stops in this deliciously sadistic and deceivingly un-superficial dark comedy that will burn you in every way.”
( LA Theatre Review – Hollywood Fringe 2011)

“Hugely enjoyable and well worth watching, The Audition is a roller-coaster ride, laced with dark humour."
remotegoat.com – (from the performance at Baron’s Court Theatre in the UK- 2013)

"The Audition" was Nominated for the Nanette Lovell Drama Award

PLEASE NOTE:
Bookings at: www.bakehousetheatre.com
We do not take phone bookings, seating is general admission, latecomers will not be admitted.

“Everything about The Audition is designed to challenge.... the sheer commitment of the actors, especially Brock’s steadily-crumbling Stella, makes for satisfying, if discomfiting, theatre.
Peter Burdon - The Advertiser
“A gripping experience..“The Audition”, seems to draw its inspiration from such masters as Harold Pinter and Ingmar Bergman....another provocative and intriguing piece of electric theatre”
Anthony Vawser - Adelaide Theatre Guide
“The Audition” is a ferocious two-hander which pushes the actors to extremes but, of course, is quite the showcase for the talented upcoming performer, a highly proficient production”
Samela Harris - Barefoot Review