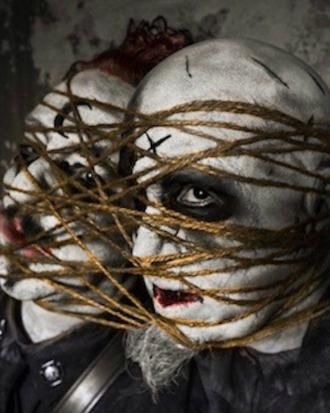 A somber meditation on destiny, lost innocence and the nature of evil.

The Laudanum Project is on its way to the 2017 Adelaide Fringe Festival to unveil its most complex work to date, The Baby Farmer.   Never content with treading the path most traveled, The Laudanum Project has devised The Baby Farmer as a multifaceted, unholy trinity that consists of a one act play, an illustrated book and an accompanying exhibition.

The Play
Set against the backdrop of London's East End during the 1870's, this one act playexplores the isolation and spiraling madness that surrounds 6 year old Agatha May andher mentally ill mother Winnifred Alcorn. Amidst an ever growing nightmare of premonitions, omens and visitations Agatha and Winnifred's darkened world slowly beginsto unravel when a shadowy stranger with a sinister agenda appears on the streets of Whitechapel and initiates a terrifying game of cat and mouse that will leave both mother and daughter changed forever.

"The Laudanum Project are very similar to what would have happened if Edgar Allen Poe and William Shakespeare had ever collaborated and set their resulting play to a superbly fitting soundtrack." - C J Dee - Dark Matter Zine.

The Book
For The Baby Farmer book artist Chloe Neath has meticulously created over 25 breathtaking illustrations that beautifully portray Agatha and Winnifred’s gloomy realm.  From astonishingly detailed panoramas of London’s East End, to skin crawling portraits ofthe characters, Chloe has captured the very essence of The Baby Farmer story in all of its jolting extremes. With full text from the play, The Baby Farmer illustrated book not only serves as a unique extension of the performance but stands alone as a stunningly dark and beautiful volume in its own right.

The Exhibition
Alongside the unsettling performance, artist Chloe Neath’s exquisite artwork from the book will be exhibited. There will be four key illustrations on display, each piece intricately detailed charcoal on brown paper, each piece both disturbing and beautiful, each piece for sale, along with signed copies of the published work.