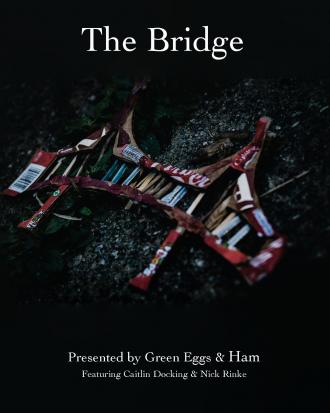 BUY TICKETS
Adelaide Fringe
" All the way from Vancouver, Canada, ‘The Bridge’ is a post-apocalyptic story of love and survival embellished with song, shadow puppetry, and Christopher Walken."
Presented by:
Green Eggs and Ham
Tickets also available via:
At the door on the night (subject to availability)

An anonymous man and woman search for the last of their kind under the beaconing arch of the Golden Gate Bridge.  Humour, heartbreak, shadow puppets, and Christopher Walken bring this post-apocalyptic tale of love and survival to life.

"From Vancouver, Canada, comes a post-apocalyptic tale in which an anonymous man and woman search for salvation under the beaconing arch of the Golden Gate Bridge.  The two are searching for remnants of human civilization, but must come to terms with the looming possibility that they are the last people on earth.  Though they have faced many obstacles along the way, they must constantly aid one another in combat against loneliness and doubt.  As they search for other survivors, the two cling to a partially make-believe world designed to keep themselves upbeat and motivated as their quest stretches on.  But what will happen when hope wavers and the darkness of the past begins to seep in?

This darkly funny and unique play explores what becomes important when the world around you has fallen apart, and how two people find ways to carry each other towards a dire and uncertain future.  Equal parts hilarious and heartbreaking, ‘The Bridge’ is a story of love and survival embellished with song, shadow puppetry, and Christopher Walken.

This is the world premiere of 'The Bridge' as a full-length production, and the first time actor-writers Caitlin Docking and Nick Rinke have performed outside of Canada."