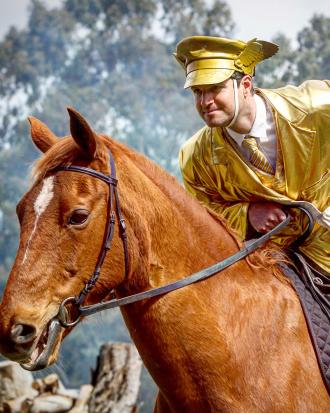 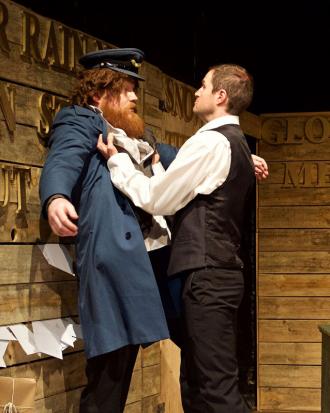 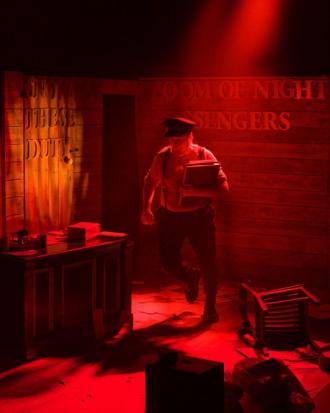 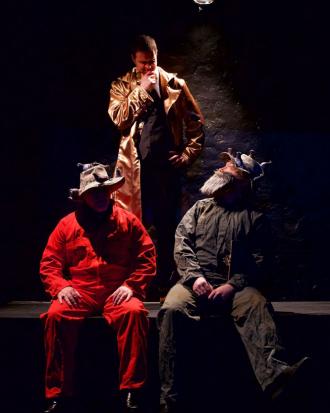 David Dyte as "Mad Al", Nick Andrews as "Moist Von Lipwig" and Hugh O'Connor as "Sane Alex". Photo by Michael Errey
BUY TICKETS
"There's a delicious ironic pleasure that, even while you are enjoying watching a comedic play, ostensibly about criminal activities, you are the ones creating this rich vein of society that's being mined and re-presented for our entertainment." BWW
Presented by:
Unseen Theatre Company

From Unseen Theatre Company and best selling author Sir Terry Pratchett comes an hilarious send-up of redemption in the age of technology.

Moist von Lipwig is a con artist.  He has excellent qualifications and experience for this line of work. He is a fraud, a natural born-criminal, an habitual liar, a perverted genius and totally untrustworthy.

This is the sort of man to whom Lord Vetinari (Patrician of Ankh-Morpork) offers a life choice – be hanged, or put Ankh-Morpork’s ailing postal service back on its feet.

It is going to be a tough decision for Moist, but perhaps there’s a shot at redemption for a man who’s prepared to push the envelope?

Of course before he comes anywhere close to success, he will have a multitude of problems to overcome.  Just to mention a few, there is his parole officer Mr. Pump – a golem made of clay who, like any other government official, is tireless in his sense of duty; there are tons of undelivered mail who insist on talking to him; the shadowy characters from the Grand Trunk Company want him deader than his dead letters, and his new “girlfriend” sees straight through him. So much for SWALK!

And here he'd thought that all he'd have to face was rain, snow, gloom of night, and the odd vicious dog or two.

Will Moist Von Lipwig redeem himself, or will he end up “going postal”?

Join us in this hilarious adventure from the pen of world famous author Sir Terry Pratchett to find out.

What the critics said about "Going Postal" in 2005-

“Funnier than most and superbly realised by director Pamela Munt. No previous Discworld play in this city has come close... the best Discworld play this side of A’Tuin... Funny, fast and unbeatably fabulous”- Rod Lewis - Encore Magazine

“This is a laugh aloud production of a Terry Pratchett tale that will appeal to lovers of the books and those new to the Discworld. The core cast are excellent. Danny Sag wears the robes of the Patrician Lord Vetinari with an understated control, Nicholas Andrews is a totally charming Moist Von Lipwig backed up in the GPO by Hugh O’Connor and Sam Tutty as a really funny duo of postmen"
Ewart Shaw - The Advertiser
"Unseen Theatre Company, is the brilliant brainchild of Pamela Munt, director, actor, and chief whip-holder Pamela is to be applauded for her vision and and her perspicacity in gathering a talented bunch of people around her. Costumes, set design, production, photography, and everything that goes into making a successful production shine....taking a good, fun production to a higher level"
Christine Pyman - Broadway World