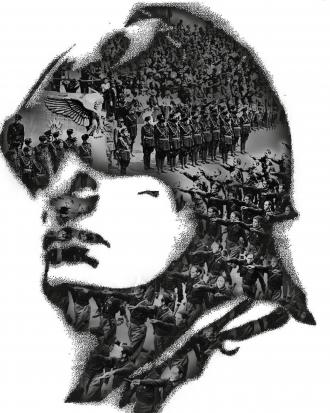 BUY TICKETS
Adelaide Fringe
4.5 STARS from The Advertiser - "This is a sophisticated, satisfying production with bravura acting deserving of full audiences"
Presented by:
Grist to the Mill Productions
Tickets also available via:
At the door on the night (subject to availability)

Who Plays The Villain?

Bassanio has been murdered and, under suspicion, Gratiano is forced to revisit his Fascist past. He was never the hero – just a minor character, the plucky comic relief – but he never thought he played the villain.

In a challenging sequel to William Shakespeare's 'The Merchant of Venice' we explore the politics of prejudice in the 20th Century and how ordinary people who never thought themselves as villains find themselves accountable for atrocities which would haunt them for life. Amongst the turmoil of post war Italy we read between the lines of Shakespeare's classic tale, examine the true nature of the characters, and ask just how politicians managed to manipulate democracy to turn a people against themselves and drive a nation apart.

Gratiano is one of three productions from Grist to the Mill at the Bakehouse studio, Adelaide Fringe. The other shows are The Empress and Me and The Unknown Soldier.

*****‘ It's a masterful performance, a smart spectacle and a further testament to Ericson's growing magnificence as a modern playwright and performer.’ British Theatre Guide
****'  Absolutely magnificent... [Ericson] is one of the most convincing actors I’ve ever seen... The production definitely leaves one with much food for thought.' Broadway Baby
****  ‘So often I’ve seen Shakespeare adaptations try too hard to fit a square peg in a round hole; this show is not one of them. Ericson, with his physically imposing, impassioned performance, has delivered a truly intelligent idea and an insightful show that will leave you thinking for days.' Fringe Guru
****  'What makes this show refreshingly different from the innumerable adaptations of Shakespeare plays, told from a minor character’s perspective, is its political engagement.' ThreeWeeks
****  'The play is beautifully scripted and gamely performed – and it offers views about fascism and racism that seem powerfully prescient given what’s happening in the world right now' Bouquets&Brickbats
****   'A remarkable performance... [the production] bucks the trend of terrible Shakespeare at the Fringe in impressive style'«««« 730Review
‘A passionate cry against racism and xenophobia in every country, in every century; it speaks to us very clearly today.’ HIGHLY RECOMMENDED SHOW FringeReview