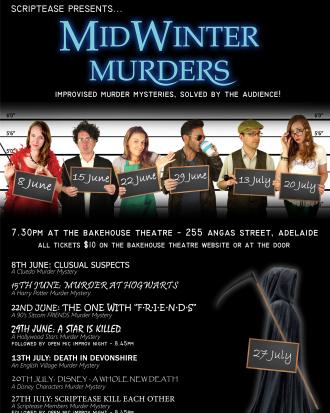 BUY TICKETS
"This is a most entertaining one hour show" -- Shelley Hampton, Stage Whispers
Presented by:
Improv Adelaide
Scriptease

Thursday night is improv night at the Bakehouse Theatre Studio! Every Thursday except the first Thursday of each month, make sure to get your seat and strap yourself in for a new show every time. Experienced improvisers will use your suggestions to create new characters, stories and absurd situations each show: completely unscripted, absolutely hilarious!

Save the date in your diary throughout the year to see companies such as Scriptease, On the Fly, and Improv Adelaide's Soap bring you improvised murder mysteries, short-form improv games and competitions, and improvised parodies of popular genres such as Downton Abbey/Upstairs Downstairs and even fantasy roleplaying games.

The current season, from 8 June to 27 July is ... MidWinter Murders presented by Scriptease.

A murder has been announced. And in the time honoured tradition of Agatha Christie, Cluedo and Midsomer Murders, it's up to our intrepid audience of detectives to solve it before the killer gets away!

Each week, our cast of unusual suspects will improvise a brand new murder mystery in some of the most loved corners of pop culture, where even they don't know the identity of the killer. The game is afoot!

"This is a most entertaining one hour show, adeptly brought to its final murderous end, almost exactly on the hour... The actors are to be congratulated on their ability to maintain focus and think on their feet for a solid hour. They certainly gave their audience of happy muggles a good time!"
-- Shelley Hampton, Stage Whispers