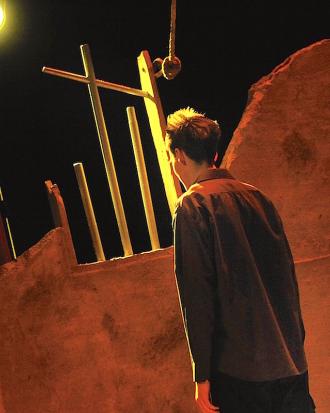 BUY TICKETS
Adelaide Fringe
4 STARS from The Advertiser. ""In this compelling 21st century take on Judas, it is difficult to conceive of an actor more engrossed in his part than Tim Marriott this Fringe"
Presented by:
Smokescreen Production and STARC Productions (UK/Adelaide)
Tickets also available via:
At the door on the night. (Subject to availability) Box office opens 30 mins before show starts

"Immediate, contemporary and poignant” The Herald

A Political Thriller with Biblical Bite in support of Amnesty International

In a contemporary single-faith Middle Eastern state, a charismatic preacher with a radical message of peace emerges from the desert. As religious violence tears the region apart, his followers are pursued, persecuted and imprisoned. Finally, a 21st century ‘Judas’ is arrested, interrogated and ultimately forced to betray his leader; but is he really the betrayer or betrayed, and who is ultimately pulling the strings?

JUDAS is co-produced by STARC Productions. STARC is a new Theatre Production company run by Marc Clement, Tony Knight and Stefanie Rossi, aiming to showcase professional theatre performance in Adelaide. Recent productions at the Bakehouse include Toyer, Two and a sell out season of Reasonable Doubt.

"two courageous companies create a compelling hour of gruelling theatre, and at a time when we ignore their message at our own peril."
Jude Hines - Stage Whispers
4 STARS - "In this compelling 21st century take on Judas, it is difficult to conceive of an actor more engrossed in his part than Tim Marriott this Fringe"
The Advertiser
This is a powerful, moving, and vitally important piece of theatre, the sort of thing that the Fringe was created to present.... Do not let this slip by"
Barry Lenny - Broadway World