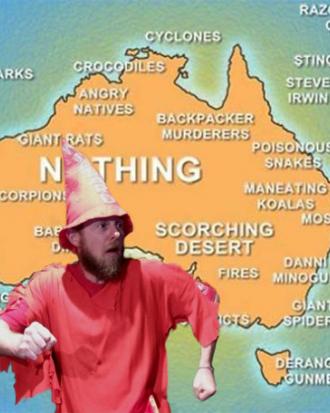 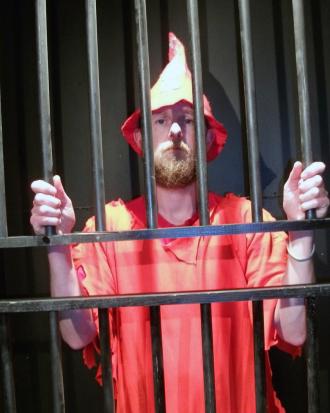 Chris Irving as Rincewind behind bars 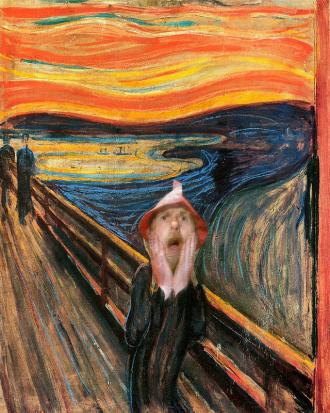 Chris Irving as Rincewind in "The Scream" 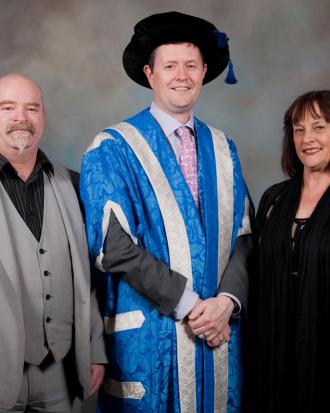 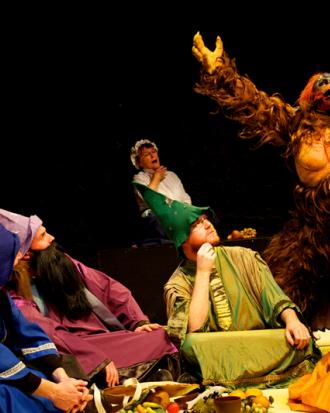 Harold, Paul, Hugh & David (foreground) Bev & Michelle (as the Librarian) background. Photo by Michael Errey
BUY TICKETS
Presented by Unseen Theatre Company. "Dead is only for once, but running away is forever" - Rincewind. From Sir Terry Pratchett's novel adapted for the stage by Pamela Munt
Presented by:
Unseen Theatre Company
Tickets also available via:
At the Bakehouse on the night. (subject to availability) Box office opens 30mins before the show starts.

“Dead is only for once, but running away is forever” - Rincewind

This one is your choice – we asked our audiences at Thief of Time recently which play they would like to see next. The Last Continent was the winner. It was followed closely by Lords and Ladies (so maybe keep an eye out next year). So we go back in Time again! This time to 6 years ago when we first produced The Last Continent. So if you missed it then, here is your chance to catch up! Of course it won’t be exactly the same, because that is what live theatre is about – every show is different!

Here is what some of the reviewers said about our 2009 production:-

“Thanks to Munt’s magical script, The Last Continent is a rib-tickling satire and a tongue-in-jowl spoof on Australia that’s fabulously funny and well worth seeing more than once.” - Stephen Davenport – Australian Stage Online.

“.....the overall feel is something like a cross between Hitchhiker’s Guide to the Galaxy and Harry Potter....Following a Tolkien-esque hero’s journey, Rincewind is assisted by a magical kangaroo and a crocodile that runs the Didyabringabeeralong pub..... a great night out” - Samantha Bond – Independent Weekly

“This time Pamela Munt has done her own adaptation and she knows the territory, and the venue really well....very sound laughs and some good solid performances.....The opening night audience enjoyed themselves noisily” – Ewart Shaw – The Advertiser

“..There is never a dull moment.....Cultural icons, in deviant and hilarious reconfigurations, appear at irregular intervals, from Priscilla, Queen of the Desert, to the invention of Vegemite, nothing is sacred.... (you) will not want to miss this production” – Barry Lenny – Glam Adelaide

ABOUT THE STORY:
On the Discworld anything can happen. Or even “not happen”. Sometimes it’s difficult to know which is which – even for the Wizards at Unseen University.
In this case, The Last Continent was “not happening”. It was dying, even as it was being built. Even the Gods who were building it didn’t quite know what was going on. Some thought it was to do with the space/time continuum, some thought it was to do with evolution taking control of itself. Others thought that there was not enough magic left in the world to glue all the pieces together. Others thought it may be something to do with the lack of rain. The one thing that they all agreed on was that it needed a hero. A hero who could eat a Pie Floater even when he was sober…….. Yep it’s our old friend Rincewind, the inept wizard who can’t even spell wizzard, but he’s the only hero left. Still…..no worries, right?

All proceeds from the Opening Night Performance will be donated to SAVES (The South Australian Voluntary Euthanasia Society)  http://www.saves.asn.au

... it’s not hard to see why this piece has proved one of their more popular efforts. ....Everything from “Skippy The Bush Kangaroo”, to Ned Kelly, “Waltzing Matilda” and the creation of Vegemite get a satirical skewering.The cast (most of whom play multiple roles, (“Monty Python” style) are consistently solid, ..... this is a fun night out, and Pratchett’s legions of fans are sure to have a blast
Benjamin Orchard - Stage Whispers
The cast of actors, many of whom were playing more than one character did well and kept great energy throughout the performance....with a real tongue in cheek, knowing wink the whole while... including that of Samm Blackmore as the Island God – a role which was perfectly presented to bring about expert hilarity!
Alicia Norton - Fringe Benefits
Unseen Theatre Company's Artistic Director, Pamela Munt , as both adapter and director, succeeded magnificently....in fact, her adaptation managed to actually enhance the plot line, whilst keeping all of the humorous ploys that we all love so much from the book. This is a really good adaptation that will have fans applauding and will make new fans for both Pratchett and Unseen. No Worries!
Christine Pyman - Broadway World