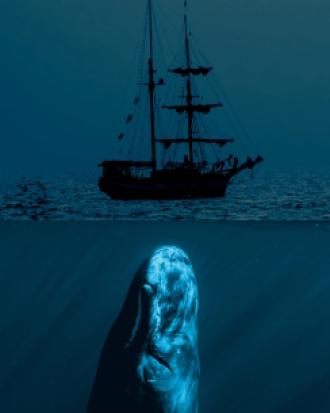 BUY TICKETS
Adelaide Fringe
5 STARS from Glam Adelaide. "There are many story telling shows in this year’s Fringe, but this has to be one of the best." Fran Edwards 3 SHOWS ONLY
Presented by:
Grist to the Mill (UK)
Tickets also available via:
At the door 30 mins before (subject to availability). Shows start ON TIME. Latecomers not admitted

Herman Melville's classic tale of the hunt for the great white whale brought to life in a stunning solo performance.

'Call me Ishmael... Now it was some years ago, never mind how long precisely, that I did take it into my head to go on a whaling voyage...'

To celebrate the bicentennial of Herman Melville's birth Ross Ericson (The Unknown Soldier, Gratiano) brings his classic tale to life in a stunning solo performance.

'...further testament to Ericson's growing magnificence as a modern playwright and performer.'' ***** British Theatre Guide on 'Gratiano'
'Powered by a magnificent solo performance from Ross Ericson' ***** Three Weeks on 'The Unknown Soldier'.

Ross Ericson is an award winning actor, director and writer. As an actor he has recently appeared in productions of 'Sucker Punch' at The Royal Court, 'Fewer Emergencies' at The Print Room and 'Dumb Waiter' at The Yvonne Arnaud Theatre. His plays 'Casualties', 'The Unknown Soldier', 'Gratiano' and 'Tom Jones' are all published by Bloomsbury Methuen. He is currently touring his solo shows 'The Unknown Soldier' and 'Gratiano'.