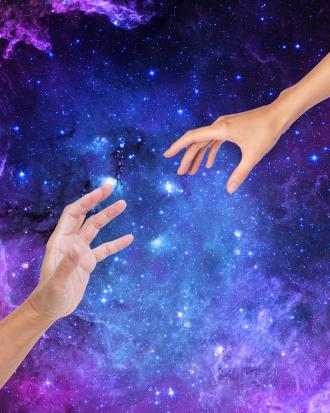 BUY TICKETS
"You think it's going to help you to forget....Going somewhere new...You think you can leave your old self behind"
Presented by:
Oily Rag Theatre
Tickets also available via:
At the door on the night (subject to availability) Box Office opens 7.30pm

'Pilgrims' is a science fiction drama by Claire Kiechel that made the 2016 Kilroys LIST of under-produced plays by women, trans and non-binary writers, and was a finalist the same year in the Eugene O'Neill Theater Center's National Playwrights Conference.

The story takes place on board the Destiny, a starship transporting hundreds of migrants from Earth to their new home in a colony far beyond. Two solo passengers, a young woman and a recently discharged soldier, are accidentally assigned to the same cabin. The cabin steward, an AI called Jasmine, expresses regret for this mistake and promises a speedy resolution. It soon turns out, however, that the two passengers will have to bunk together for the duration of the hundred day journey and, adding insult to injury, must be confined to their cabin due to a vaguely described "quarantine". With only each other and Jasmine for company, the Girl and the Soldier start to pass the time playing games of make-believe, in which their own stories and secrets start to be revealed.

'Pilgrims' is a delicate examination of trauma and the healing process that "displays a strong sense of imagination that manages to mix humor and tragedy together in a welcome balance" (The Herald-Tribune), and has been praised as "haunted and haunting" (The Chicago Sun Times) and "fresh, absorbing and tautly told" (Saratoga Magazine). It has now been performed professionally by several companies in the USA, and Oily Rag Theatre is excited to be presenting it to an Adelaide audience as their first ever production at the Bakehouse Theatre.

Rating: For mature audiences (contains some scenes of a sexual nature)

An amateur production by arrangement with Origin Theatrical on behalf of Samuel French Ltd, presented by Oily Rag Theatre