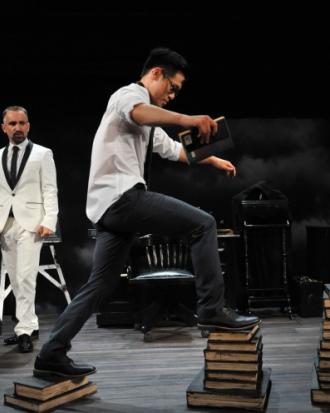 “It is funny, the mortals always picture us as putting things into their minds. In reality, our best work is done by keeping things out...” - C.S. Lewis, The Screwtape Letters

"The whole production team is to be congratulated on a memorable and captivating show that has brought the brilliant wit and insights of C.S.Lewis to the stage and to even greater accessibility for a modern generation."
- Philip Edwards, Theatre Press

One of the most popular works of C.S. Lewis (The Chronicles of Narnia, The Space Trilogy), this brilliantly funny literary masterpiece – in a special new adaptation for the stage - provides a humorously accurate insight into the frailties of human nature.

Celebrating 75 years in print in 2017, The Screwtape Letters follows the correspondence between a senior demon, Screwtape, and his nephew, a junior tempter named Wormwood – whose task it is to secure the damnation of a young man known as “The Patient”.

Directed and adapted by Hailey McQueen, The Screwtape Letters is masterfully performed by Yannick Lawry (Australia: The Story of Us) as Screwtape, while George Zhao (The Family Law) injects a wonderful physical comedy to his role, in his portrayal of Screwtape’s assistant – Toadpipe.

For more information about cast and crew go to https://www.screwtapeshow.com.au/the-creatives
Or refer to attached document.