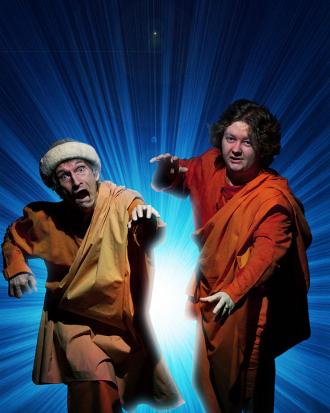 Philip Lineton and Leighton James in "Thief of Time" 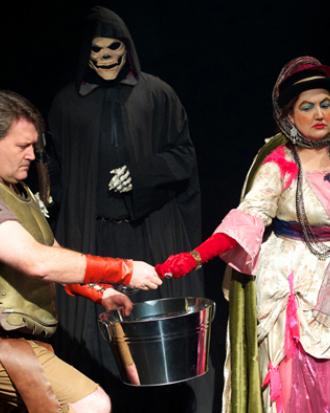 Not to worry, the Thief (Lobsang) has the History Monks to help him, and the Clockmaker (Jeremy) has the Auditors to help him.

It is the History Monk’s  job to store time and pump it from the places where it’s wasted  - like underwater (I mean,  how much time does a codfish really  need?) to places like cities, where there’s never enough time for anyone. These are the people who will lead Lobsang on his quest to save time.

But you know teenagers!  One of them is always bound to fall into the wrong crowd.  Jeremy’s reputation as a clockmaker has spread far and wide.  It has attracted the attention of the Auditors.   Auditors are tidy. They believe that everything has its place in time and space and that it should remain there.  Forever. With Jeremy’s help they can stop time by building the world’s only truly accurate clock. That should stop those pesky humans who don’t seem to understand schedules and time management schemes.

The only thing that the Auditors are not reckoning on is that Lobsang has more than the History Monks to help him.  He has heroes! and if there’s anything the Discworld is good at, it’s assembling a full cast of heroes, even if they are the Four Horsemen of the Apocalypse. (well five, actually, if you count the one who left before they became famous).

Sound complicated?  Well that’s life isn’t it? (and time). Come and see if you can sort it all out.   If you can’t, then it doesn’t matter as long as you LOL (the real weapon of choice of any self-respecting hero)

All proceeds from the Opening Night Performance will be donated to SAVES (The South Australian Voluntary Euthanasia Society)  http://www.saves.asn.au/

"This production is packed to the brim with interesting and hilarious characters, ..The cast is marvellous, and everyone pulls off their respective parts nicely. Lineton as Lu-Tze seems like he’s been pulled directly from a Pratchett novel, and O’Connor’s rendition of Death is spectacularly commanding. The Four Horseman (and the Milkman) are also stand-outs."
James Rudd - Glam Adelaide
"Thief of Time could be one of the best uses of your time.Under the more than capable direction, adaptation, and producing of Pamela Munt, this play flows, somewhat like Time itself ....(and) is complemented by her very talented and dedicated cast...There were so many excellent performances in this production that it's hard to know where to start.....Go and see it."
Christine Pyman - Broadway World
Munt’s script captures Pratchett’s greatest strength as a writer, namely his gift for dialogue that is at once gleefully absurd and bitingly witty.... ensuring that many scenes are hilariously entertaining to watch.... The talented ensemble assumes multiple roles, Monty Python style...and the filmed narration by Melanie Lyons is a hoot, her relaxed, casual tone adding an extra layer of humour
Benjamin Orchard - Adelaide Theatre Guide