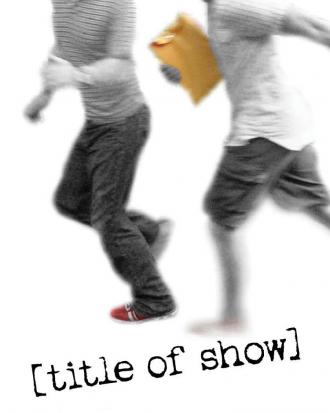 A hilarious peek into the creation of a Broadway show, [title of show] is a true story based on itself; some scenes have been altered to protect the not-so-innocent.

[Title of Show] follows the journey of Hunter and Jeff, two nobodies in New York, who long to make their mark in the world of musical theatre. They hear about the New York Musical Theatre Festival, but with the submission deadline only three weeks away the boys worry about what they can possibly write in that time. With nothing to lose, they decide to enlist the help of their friends Susan, Heidi and Larry to create an original musical. They make a pact to keep writing until the deadline and submit whatever they have on paper. Throughout the show they suffer writer’s block, dream about the show changing their lives, fight metaphorical vampires, and learn valuable lessons about themselves as people, artists and friends.

A postmodern homage to the tradition of backstage musicals like 42nd Street, The Producers, and A Chorus Line, [title of show] is, above all, a love letter to musical theatre and the joys of collaboration.

Not recommended for teenyboppers under 15; includes moderate levels of bad language, sexy themes and gratuitous use of theatre-isms.

The laughter from the audience on opening night was frequent and very loud. Given this enthusiastic response, it is very hard to conclude that “[title of show]” is anything but a must see event at this year’s Adelaide Fringe Festival,
Benjamin Orchard - Stage Whispers