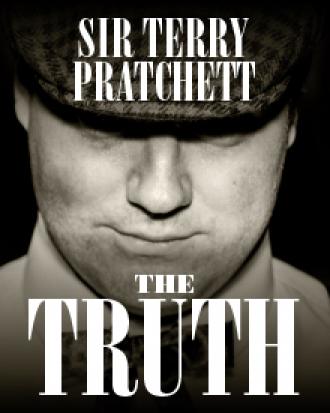 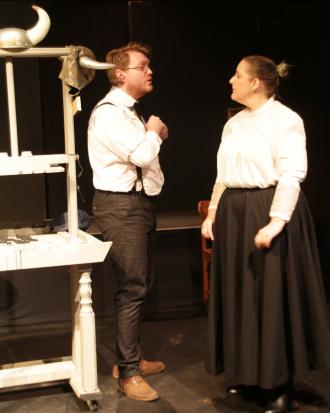 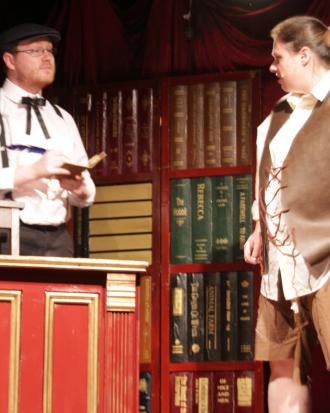 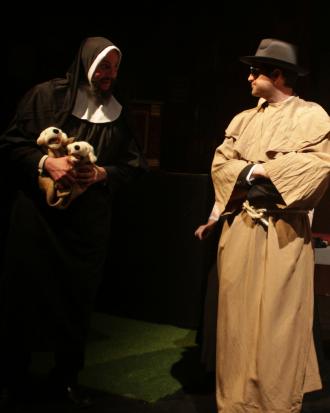 Mr. Tulip and Mr. Pin as Sister Jennifer and 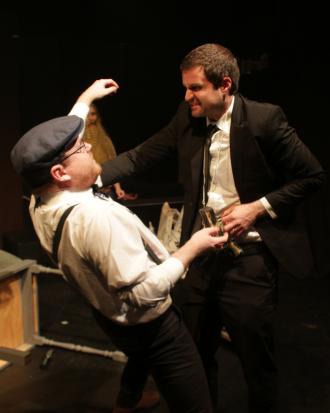 Hugh O'Connor as William de Worde and Nick Andrews as Mr. Pin
BUY TICKETS
I highly recommend you go along and see this clever funny adaptation, or “The Truth will make you fret”!! - Allison Thomas - Encore magazine
Presented by:
Unseen Theatre Company
Tickets also available via:
At the door on the night (subject to availability)

The truth shall make ye fret - Particularly if your deadline is urgent because, as everyone knows -  “A lie can run around the world before the truth has got it’s boots on”

There’s been a murder. Allegedly.  But William de Worde, accidental editor of the Discworld's first newspaper, has got an inside line on the hot story.  The facts say that Ankh-Morpork’s ruler, Lord Vetinari,  is guilty. But as Willam soon learns, facts don’t always tell the whole story.  There’s that pesky little thing called THE TRUTH, that just keeps trying to get out.  Luckily William has an informant who just might help it stay in.   The informant can’t be a talking dog because dogs can’t talk. He’s known only as...Deep Bone.

Through all of his investigations, William must cope with the daily perils of a journalist's life -- people who want him dead, a recovering vampire with a suicidal fascination for flash photography, some more people who want him dead in a different way and, worst of all, the man who keeps begging him to publish pictures of his humorously shaped vegetables.

Then there are the dark forces high up in Ankh-Morpork’s society who are plotting to overthrow Lord Vetinari and who have employed two Tarantino-esque thugs, Mr. Tulip and Mr. Pin for the purpose.  They mean business.

William just wants to get at THE TRUTH. Unfortunately, everyone else wants to get at William, and it's only the third edition...BUT.....“If  it’s published, it’s ink-validated”

“This is a terrifically funny outing” –  Goodreads

“Sag is amusing as the vampire....Nick Andrews and Paul Messenger play henchmen Mr Pin and Mr Tulip with hilarious results.... Mr Slant (Pamela Munt), a zombie lawyer, is menacing as the criminal mastermind....Aimee Ford is delightful as anonymous tipster Gaspode..Whether or not you are a fan of Pratchett’s work, you will be pleased with the results. An entertaining night at the theatre.
Kerry Cooper - Stage Whispers
The truth, they say, will set you free. In this delightful whimsical evening, it will make you laugh, and also think. The arrival of 'fake news' and challenges to the freedom of the press makes this Pratchett story remarkably pertinent, and incidentally very funny.
Ewart Shaw - The Advertiser
“The Truth” is basically a comical look at newspapers and the ethics of journalism (apparently there are some!)......a very funny, fairly fast paced, fun couple of hours of entertainment....... Whether you are a Pratchett fan or not, this production is just a great piece of escapist fun done very well by Unseen Theatre – just don’t let it be unseen by you.
Brian Godfrey - Adelaide Theatre Guide