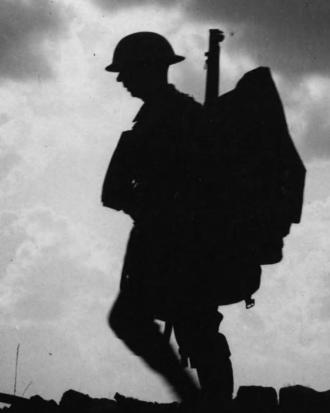 BUY TICKETS
Adelaide Fringe
The Australian Premiere of the 2016 Edinburgh Fringe sell-out Five Star Show
Presented by:
Grist To the Mill Productions Ltd.
Tickets also available via:
At the door on the night (subject to availability)

4 STARS from The Clothesline
http://theclothesline.com.au/?s=the+unknown+soldier

Jack stayed on when the guns fell silent, to search the battlefields for the boys that could not go home - for the dead and the missing, for both enemy and friend.  Amongst the rusty wire and unexploded bombs Jack is looking for something – looking for someone. He has a promise to keep and a debt to repay, and now there is this strange request from the generals.

The Unknown Soldier is moving, often humorous, but above all thought provoking. It looks at the First World War from a new perspective, through the eyes of a man who has survived the carnage but who finds it hard to return home.  A story of comradeship, betrayal and of promises both broken and kept following the carnage of World War One.

The Unknown Soldier is one of three productions from Grist to the Mill at the Bakehouse studio, Adelaide Fringe. The other shows are Gratiano and The Empress and Me.

*****  ‘If you don’t ever want to see another WW1 play, then you want to see *this*. Superb!’  FringeGuru
*****  ‘An unmissable and thought-provoking play that has so much relevance in today’s society’Edinburgh Festivals Magazine
*****  ‘Powered by a magnificent solo performance from Ross Ericson’  ThreeWeeks
*****  ‘An exemplary piece of solo theatre. It can certainly hold its head up among the best of war stories’ TVBomb
****  ‘It’s not about glory or futility, it’s about the loyalty forged between friends’  The Scotsman
****  ‘Strong writing, an original approach and a sensitive performance bring fresh power to a reminder of the horrors of war.’The Stage
****  ‘Filled with far more nuance and originality than most Great War plays’  British Theatre Guide
****  This is well worth a watch, whether you enjoy war plays or not’  Edinburgh Guide
****  'Strongly recommend this play to everyone… it is guaranteed to make you laugh but will also bring a tear to your eye – a great tribute to the unknown soldiers’  Young Perspective
You won’t be disappointed’ OUTSTANDING SHOW FringeReview

This piece is well written, entertaining, informative and expertly acted... the performance was superb. 4.5 STARS
Trish Francis - Glam Adelaide
"The message is loud and clear – in times of war ordinary people get to see and experience extraordinary brutality. Ericson’s performance as the soldier who remembers is strong, consistent, and authentic. Humour is used to try and mask the unthinkable, and in this context is very British.
4 stars - Michael Coghlan – The Clothesline
"Apart from when the nightmare disarms his control, this matter-of-fact soldier tells all... and holds our attention every minute he is on stage. ..heart-breaking moments ....make for a play and performance not to be forgotten. And, oh, he needs to tell about Tom. Better go and hear what he has to say. You won’t forget it.
Valerie Lillington - Australian Stage Online