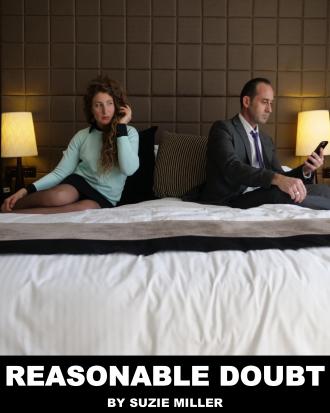 BUY TICKETS
Two jurors. A hotel room. One night. One verdict. Guilty or not guilty…you decide.
Presented by:
STARC Productions

'What happens when you’re forced to reconsider your verdict two years after the trial?'

Anna and Mitchell were members of a 'hung jury' for a murder trial. But during the trial they became more than just acquaintances…two years later they reunite in a luxury hotel. What happens is beyond their expectations.

Reasonable Doubt delves into the nature of our different perceptions of reality as well as what is really true in the sphere of human relationships. The audience become voyeurs to this search for redemption mixed with the very human desire to be loved for who we are, despite our flaws.

It is a fast-paced thriller about lies, betrayal, guilt and the desperate search for truth, justice, honour and courage in the face of human desires that could lead to a person’s ultimate downfall.

'Urgent and compelling, you will be emotionally exhilarated from start to finish.'

Stefanie Rossi continues her very rapid rise as a leading light....Marc Clements... brings great emotional depth to his character.... a brisk, tightly-directed production by Tony Knight and STARC Productions.
Peter Burdon - The Advertiser
This is a taut hour of theatre, made more intense by the intimacy of the Bakehouse Theatre, and the performances have been selling out. Be sure to see this piece.
Barry Lenny - Broadway World
Director Tony Knight skilfully crafts the words into an unsettling voyeuristic ride that has the audience constantly jolted ... Reasonable Doubt, at 60 minutes running time is quite a rollercoaster ride..
Shelley Hampton - Stage Whispers