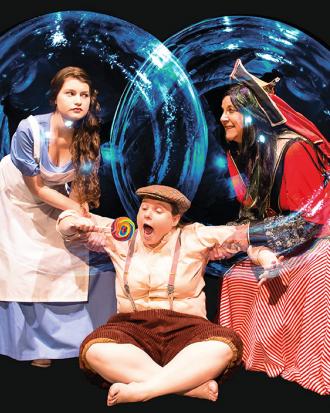 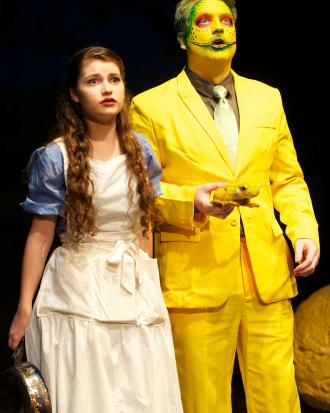 Josie Giorgio as Tiffany, Hugh O'Connor as The Toad - Photo by Michael Errey 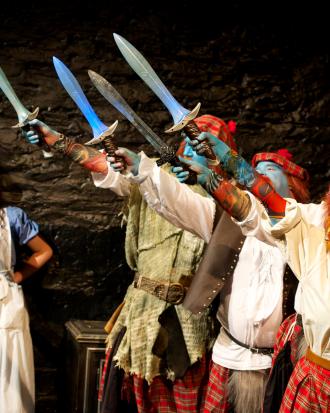 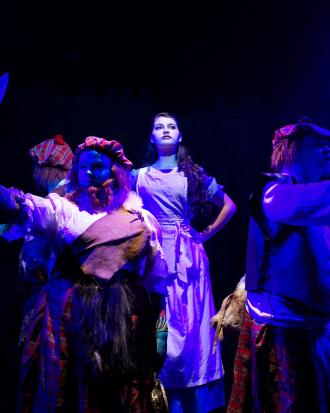 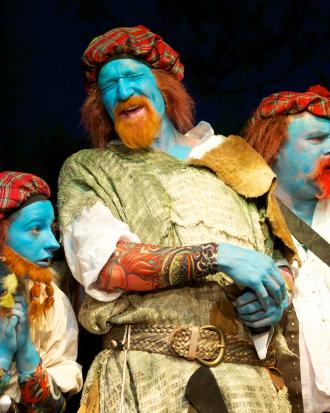 Dalestair Kidd, Harold Roberts, David Dyte as The Wee Free Men. Photo by Michael Errey
BUY TICKETS
"Munt’s stage version of The Wee Free Men is a rare adaptation that more than lives up to the standard set by its creator, the late Sir Terry Pratchett....The show is an absolute riot of comedy and resourceful staging.. Don't miss it!"
Presented by:
Unseen Theatre Company
Tickets also available via:
At the door on the night, subject to availability. PLEASE NOTE: Earlier starting time at 7.30pm. Box office opens 7pm

An hilarious Discworld faerie tale for young adults, old youngsters and anyone in between. In the first of a series of Discworld novels for young adults, we meet the young witch-to-be Tiffany Aching – a girl who reads the dictionary for fun - because no-one ever told her not to.

With a trusty frying pan as her weapon, her grandmother’s magic book (well actually its called “Diseases of the Sheep”) and the Wee Free Men by her side, Tiffany ventures into the realm of faerie land to rescue her very sticky, and not particularly likeable, baby brother.

But, of course, all is not what it seems.  This is not the world of bright pretty flowers, blue skies with fluffy white clouds, kind fairies, impish pixies and happy endings that abound in our childhood picture books.

Instead, Tiffany must face a world where dreams can come to life and really hurt you.   She must battle headless horsemen, ferocious grimhounds, terrifying dreams and ultimately the sinister Queen of the Faeries herself. . . .

Not to worry, - she has The Wee Free Men -  the fightin’, thievin’, pictsies who were thrown out of Fairyland for being Drunk and Disorderly to help her........

“What makes The Wee Free Men so wonderful is Pratchett’s ability to make realistic, human characters in the middle of an otherwise zany world” – Book Slut Review

“There is such humanity and feeling in the undercurrents of this book that you won’t be able to help but be taken back to your own childhood moments that have remained untainted by the harsh reality of adulthood.”  - Fantasy Book Review – UK

“Cordial, stimulating, and above all funny.. Munt’s stage version of .. The Wee Free Men is a rare stage adaptation that more than lives up to the standard set by its creator, the late Sir Terry Pratchett....The show is an absolute riot of comedy and resourceful staging.. . Don't miss it! Or there will be a reckoning! Crivens!”
Stephen Davenport - Barefoot Review
“Eccentric, charming and endearing...The Wee Free Men is scattered with comedy, satire and life lessons for us all... you will love this adaptation...Josie Giorgio was a particular stand-out, Natalie Haigh's performance brought dynamism and charisma, while the tongue in cheek humour of Toad played by Hugh O'Connor brought a beautiful energy to the stage"
Sarah-Jean - TREv
“It's totally enthralling sheer magic to experience this production… Set changes throughout utilised possibly the most brilliant concept I've ever seen, the thieving ways of the Nac Mac Feegle…Unseen Theatre Company just keeps getting better and better, and this production will enchant and take you on a very special trip. Enjoy.”
Christine Pyman - Broadway World

Original Novel by: Sir Terry Pratchett
Adapted for the Stage by: Pamela Munt
Directed by: Pamela Munt
Production Manager and Stage Manager: Andrew Zeuner
Lighting and Sound by: Stephen Dean
Costumes by: Michelle Whichello
Featuring: Josie Giorgio as Tiffany, Harold Roberts as Rob Anybody, Elaine Fardell as Kelda and the Faerie Queen, plus the usual cast of thousands
Photo for poster by Stephen Dean